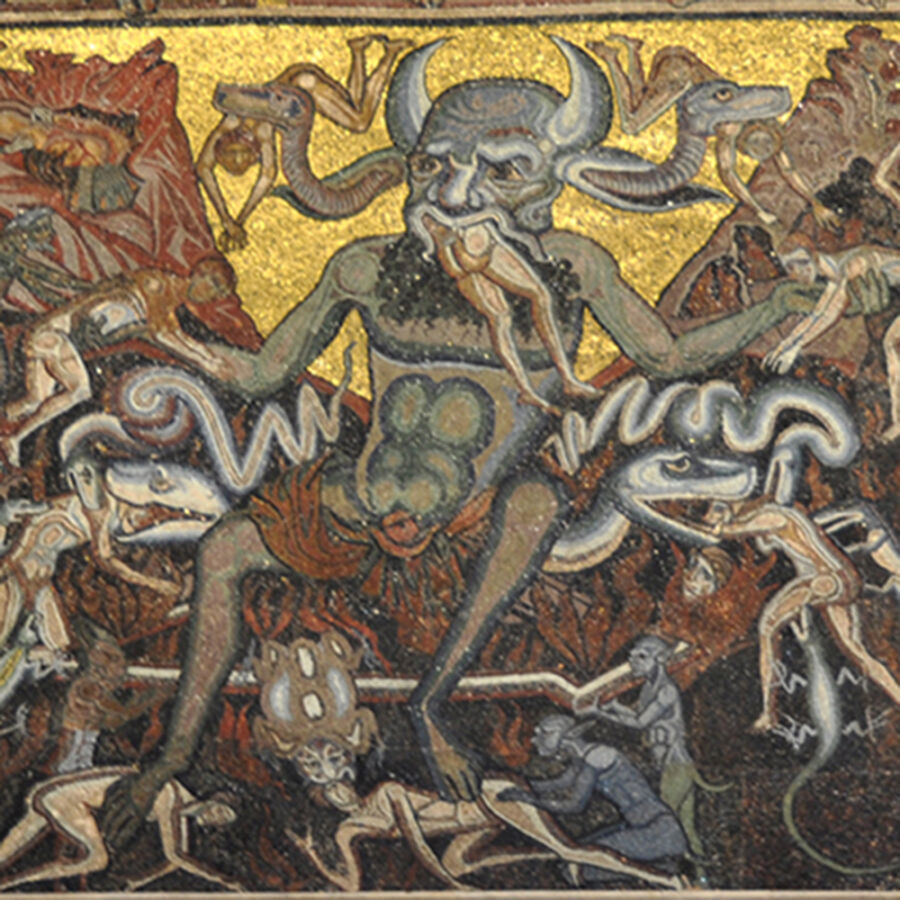 “COVID and the Anti-Vaxxers”

JK, it’s a 13th-century image of hell from the Florence Baptistery. Europe has suffered through many plagues and pandemics over the centuries — and in the Middle Ages (before they had the miracle of vaccines), they thought it was God’s anger or the devil that was making their lives miserable. They had no science to ignore — unlike today, when many in our society insist on bringing this avoidable misery upon our community.

Back then, life was “nasty, brutish, and short,” leaving medieval people obsessed with what came after: Will I go to heaven or hell? And this mosaic made it crystal clear what the fate of the wicked would be. You’d be sent to hell, where souls were devoured by horned ogres, chomped on by snakes, harassed by Spock-eared demons, and roasted in eternal flames.

Florence’s Baptistery is even older than this 13th-century mosaic. Built atop Roman foundations, it’s the city’s oldest surviving building — nearly 1,000 years old. The Baptistery is best known for its bronze Renaissance doors (including Ghiberti’s “Gates of Paradise”), but its interior still retains the medieval mood. It’s dark and mysterious, topped with an octagonal dome of golden mosaics of angels and Bible scenes.

Dominating it all is the mosaic of Judgment Day. Christ sits on a throne, spreads his arms wide, and gives the ultimate thumbs-up and thumbs-down. The righteous go to heaven, the others to hell.

Of course, no one in medieval times knew exactly what hell was. Even the Bible lacked specifics, describing only a place that’s dark, underground, fiery, unpleasant, everlasting, and segregated from the realm of the blessed.

The mission of the artists who did this mosaic: to bring hell to life. It’s a chaotic tangle of mangled bodies, slithering snakes, and licking flames. In the center squats a bull-headed monster, with his arms outstretched like Christ’s demonic doppelgänger. He gorges on one poor soul, grabs the next course with his hands, and stomps on two more souls, while snakes sprout from his ears and tail to grab more victims.

Graphic details like these were groundbreaking in pre-Renaissance times. We see the beast’s six-pack abs, braided beard, and wrinkled red robe that echoes the flickering flames. The damned have naturalistic poses — crouching, twisting, gesturing — and their anguished faces tell a sad story of eternal torment.

This mosaic’s realism proved to be hugely influential for proto-Renaissance artists like Giotto, and the building itself inspired Renaissance architects like Brunelleschi. And shortly after this mosaic was completed, a little baby named Dante Alighieri was dipped into the baptismal font just beneath it. Dante grew up well aware of this hellish scene. When he wrote his epic poem, Inferno (“Hell”), he described it with the same vivid imagery: craggy landscapes, mobs of naked wretches, a Minotaur in the center, and so on. Dante’s motifs inspired other artists over the centuries (such as Giotto and Signorelli) who created Europe’s altarpieces, paintings, novels, and illustrations. These shaped the imaginations of people around the world. And much of it can be traced to Florence’s Baptistery, and to those anonymous artists who labored here in the 13th century, determined to give ’em hell.

Contiki Tours Review: The Good and Bad of Traveling Europe With...

Comrades No More: Thoughts on Russia’s Invasion of Ukraine

Spain Train Guide – How To Travel Spain By Train