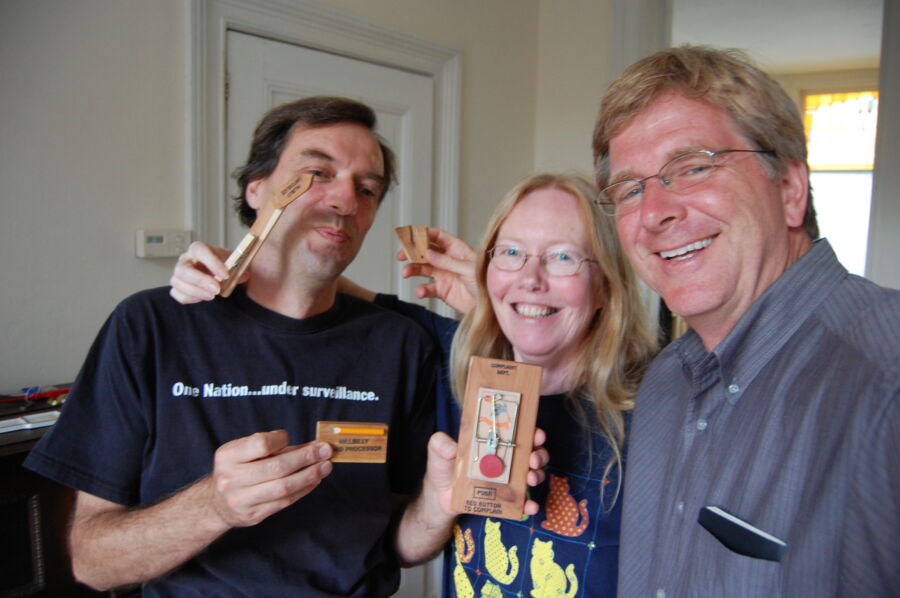 I believe a regular does of travel memories can be good for the sou. Here’s one of my favorites — and I’d love to hear some of your most memorable travel tales, as well.

It’s the summer of 2008, and I’m hanging out in the living room of my B&B in the Amsterdam suburb of Haarlem with my hosts Hans and Marjet. Reaching for my Heineken, I notice it sits on a handbook the Dutch government produces to teach prostitutes about safe sex. Thumbing through it, I say to Hans, “It’s both artistic and explicit.”

“It’s Victoria without the secret,” he whispers playfully.

“Isn’t this shocking to a lot of people?” I ask.

“Only to the English and the Americans,” he replies. “Remember, this is Holland. Last night we saw a local TV documentary. It was about body piercing, in full graphic detail — tits, penises, everything. Last week there was a special on the Kama Sutra. Sexual gymnastics like I had never seen. To us Dutch, these were only two more documentaries . . . no big deal. Perhaps these would have been big hits on American TV.”

“I don’t know,” I say, realizing that I was finding the handbook more interesting than Hans. “But you know what the most-visited page on my website is? A goofy little article comparing Amsterdam’s two sex museums.”

“Sex is not clickbait here. It’s not a taboo in Holland,” says Marjet. “But we are not reckless with sex, either. The Dutch teen pregnancy rate is one-half the American rate.”

Staying in a B&B saves money. As a bonus, I find that B&B hosts are often great students of intercultural human nature and love to share their findings. They give me an intimate glimpse of a culture I couldn’t get from the front desk of a hotel.

This is certainly true of Hans and Marjet, who encourage guests to make themselves thoroughly at home. And in their living room, with its well-worn chairs, crowded books, funky near-antiques, and an upright piano littered with tattered music, it’s easy to feel at home.

Hans and Marjet live in three rooms and rent out five. Hans would like a little more living space. Like his neighbors, he could glass-in his tiny backyard, but he couldn’t bear trading away his lush but pint-sized garden. Bringing me another beer, he asks, “How long do you stay here this time?”

“Not long enough” is my regular response. I’m Hans’ pet Yankee. He’s on a personal crusade to get me to relax, to slow down. To Hans, I am the quintessential schedule-driven, goal-oriented American.

Hans provides more insight into the cultural differences of their guests. “We Dutch are in the middle,” he says. “We are efficient like the Germans — that’s why there are many American companies here in Holland. But we want to live like the French.”

“And crack jokes like the English,” adds Marjet. “Everybody here admires the British sense of humor. We watch BBC for the comedies.”

Hans sees cultural differences in their guests’ breakfast manners, too. “Americans like hard advice and to be directed. Europeans — especially the Germans — they know what they want. The French take three days to defrost. But Americans talk and make friends quickly. Europeans, even with no language differences, keep their private formal island at the breakfast table.”

Pointing to their two kitchen tables, he continues. “If there are Germans sitting here and Americans there, I break the ice. Introducing the Americans to the Germans, I say, ‘It’s okay, they left their guns in the States.’ We Dutch are like the Germans — but with a sense of humor.”

Getting back to our talk about how different cultures approach sex, Marjet says to Hans, “Tell Rick the ‘Dutch boys on the English beach’ story. This body stuff may be stressful to Americans, but it sends the English under their pillows.”

“As a schoolboy I traveled with a buddy to England,” Hans begins. “We changed our pants on the beach without the towel hassle — no problem. We’re good Dutch boys. As usual, the beach had an audience: bench-loads of retired Brits enjoying the fresh air, suffering through their soggy sandwiches. When my friend began changing into his swimsuit, all the people turned their heads away. Amused by our power to move the English masses, we repeated the move. I pulled my trousers down and all the heads turned away again.”

Marjet, laughing like she’s hearing the story for the first time, says, “We don’t see many English on our beaches.”

“We get mostly Americans,” says Hans.

“We’d be happy to fill our house with only Americans,” says Marjet. “Americans are easy to communicate with. They’re open. They taught me to express myself, to say what I really think.”

Hans breaks in with a Tony the Tiger tourist imitation, “Oh wow, this is grrreat! What a grrreat house you have here!”

“The English don’t know how to be flabbergasted,” says Hans.“

I think you nearly flabbergasted them on that beach,” Marjet says. “When we visited Colorado, my trip went better when I learned to say ‘wow’ a couple of times a day.”

Curling comfortably in the corner of the sofa, tucking her legs under her small body, Marjet explains, “When an American asks, ‘How are you?’ we say, ‘Okay,’ to mean ‘good.’ The American says, ‘That doesn’t sound very good.’ We explain, ‘We’re European.’”

Fascinated by the smiley-face insincerity of America, Marjet says, “In the US, even supermarket shopping bags have big ‘smile and be a winner’ signs.”

“It’s true,” I agree. “Only in America could you find a bank that fines tellers if they don’t tell every client to ‘Have a nice day.’”

Hans says, “Did you know that the Dutch are the most wanted workers at Disneyland Paris? This is because most Dutch are open-minded. We can smile all day. And we speak our languages.”

Marjet explains, “In Holland when someone asks, ‘Do you speak your languages?’ they mean: Do you speak French, German, and English, along with Dutch?”

Hans continues. “And for us, acting friendly is maybe less exhausting than for the French. Can you imagine a French person having to smile all day long?”

Hans tops off my glass of Heineken. “God created all the world. It was marvelous. But France . . . it was just too perfect. So he put in the French to balance things out.”

“And Canada could have had it all: British culture, French cuisine, American know-how,” says Marjet.

“But they messed up and got British food, French know-how, and American culture.”

As I climb the steep Dutch stairs to my bedroom in the loft, I ponder the value of friends on the road. The most memorable moments of this day came after I was done sightseeing.