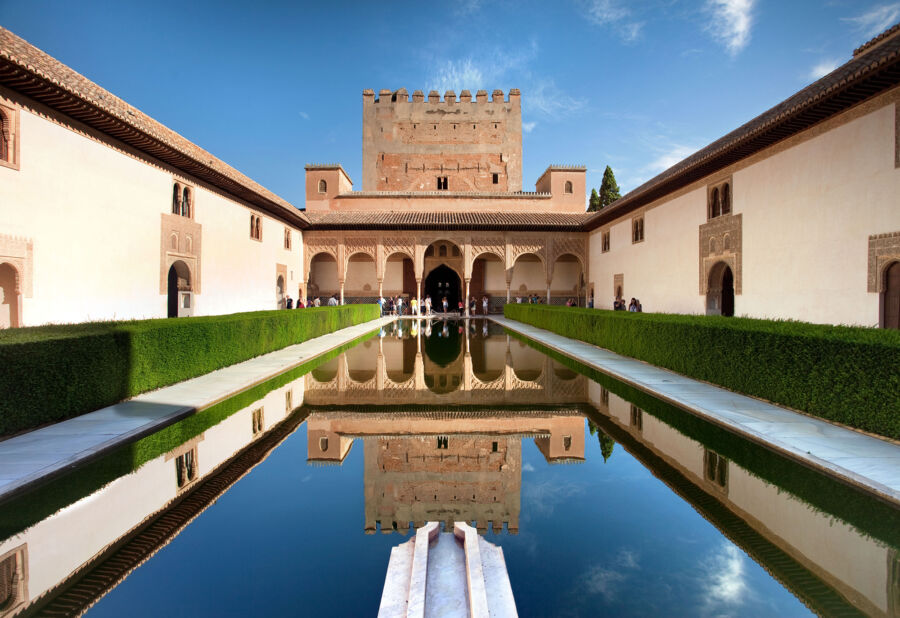 For me, one of the great joys of travel is having in-person encounters with great art and architecture — which I’ve collected in a book called Europe’s Top 100 Masterpieces. Here’s one of my favorites:

Nowhere else does the splendor of Moorish civilization shine so beautifully than at the Alhambra — this last and greatest Moorish palace in Europe.

For seven centuries (711–1492), much of Spain was Muslim, ruled by the Islamic Moors from North Africa. While the rest of Europe was slumbering through the Dark Ages, Spain blossomed under Moorish rule. The culmination was the Alhambra — a sprawling complex of palaces and gardens atop a hill in Granada. And the highlight is the exquisite Palacios Nazaríes, where the sultans and their families lived, worked, and held court.

You enter through the fragrant Court of the Myrtles, into a world of ornately decorated rooms, stucco “stalactites,” filigreed windows, and bubbling fountains. Water — so rare and precious in the Islamic world — was the purest symbol of life. The Alhambra is decorated with water, water everywhere: standing still, cascading, masking secret conversations, and drip-dropping playfully.

As you explore the labyrinth of rooms, you can easily imagine sultans smoking hookahs, lounging on pillows and Persian carpets, with heavy curtains on the windows and incense burning from the lamps. Walls and ceilings are covered with intricate patterns carved in wood and stucco. (If the Alhambra’s interweaving patterns look Escheresque, you’ve got it backward: The artist M. C. Escher was inspired by the Alhambra.) Because Muslim artists avoided making images of living creatures, they ornamented with calligraphy — by carving swoopy letters in Arabic, quoting poetry and verses from the Quran. One phrase — “only Allah is victorious” — is repeated 9,000 times.

The Generalife gardens — with manicured hedges, reflecting pools, playful fountains, and a breezy summer palace — is where sultans took a break from palace life. Its architect, in a way, was the Quran, which says that heaven is like a lush oasis, and that “those who believe and do good, will enter gardens through which rivers flow” (Quran 22.23).

The Alhambra’s much-photographed Courtyard of the Lions is named for its fountain of 12 marble lions. Four channels carry water outward — figuratively to the corners of the earth and literally to the sultan’s private apartments. As a poem carved onto the Alhambra wall says, the fountain gushes “crystal-clear water” like “the full moon pouring light from an unclouded sky.”

The palace’s largest room is the ornate throne room — the Grand Hall of the Ambassadors. Here the sultan, seated on his throne beneath a domed ceiling of stars, received visitors. The ceiling, made from 8,017 inlaid pieces of wood (like a giant jigsaw puzzle), suggests the complexity of Allah’s infinite universe.

The throne room represents the passing of the torch in Spanish history. It was here in the year 1492 that the last Moorish king surrendered to the Christians. And it was here that the new monarchs, Ferdinand and Isabella, said “Sí, señor” to Christopher Columbus, launching his voyage to the New World that would make Spain rich. But the glory of the Alhambra lived on, adding an elegance and grace to Spanish art for centuries to come.

Today, the Alhambra stands as a thought-provoking reminder of a graceful Moorish world that might have flowered throughout all of Europe — but didn’t.

Camino de Santiago – It’s all about the journey. Part II

Camino de Santiago – It’s all about the journey. Part I

Barcelona Travel Guide — How to Visit Barcelona on a Budget