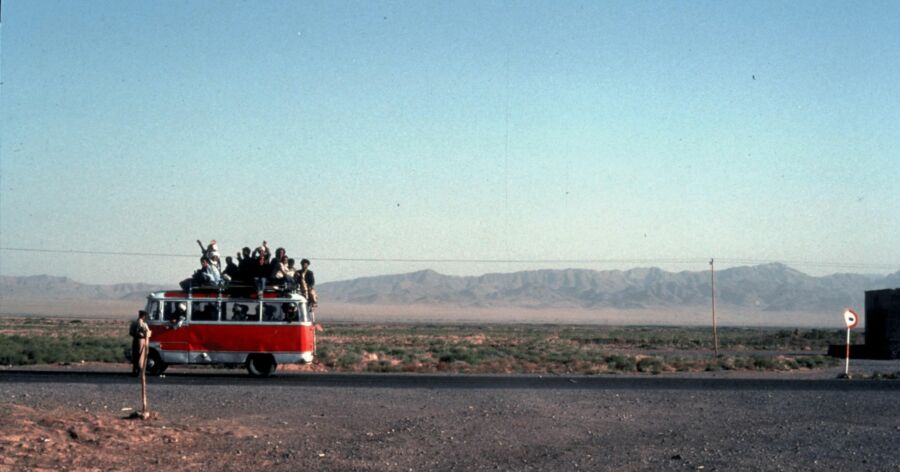 With the fall of Afghanistan, I’ve been reflecting on my travel experiences there as a 23-year-old backpacker on the “Hippie Trail” from Istanbul to Kathmandu. Yesterday and today, it’s a poor yet formidable land that foreign powers misunderstand and insist on underestimating.

In this journal entry from 1978, stow away with me on the bus from Mashhad, Iran, to Herat, the leading city in western Afghanistan.

My Spanish friend woke me at 5:45. I think I would have slept all morning if he hadn’t have come in. We caught a ride down to the station and, weakly, I searched for breakfast. Half a liter of milk and a small cake did quite nicely and we were on our way.

Here was the beginning of a new world. Afghanis look Asian and Mongolian compared to Iranians and Afghanis and their twine-wrapped bundles of belongings filled the bus station. Our bus left at 7:20 and was pretty full of Western travelers — the most we had seen since the Istanbul-Tehran bus.

Gene and I were quiet and weak. I kind of sat there, hot wind blowing in my face with my hair whipping around, hoping the kilometers would tick by and knowing I was plunging farther and farther away from Europe.

At 10:30 we came to the desolate Iran-Afghanistan border. What a place! Just stuck in the middle of nowhere. We gave up our passports and walked into the building. An interesting museum with a message greeted us. In several glass cases were the stories and hiding places of many ill-fated drug smugglers. It made for interesting reading — who smuggled what in where and was sent to prison. I have this terrible fear that someone will plant some dope in my rucksack and I’ll get framed. That would be no fun at all.

We got through the Iranian customs rather easily and then we walked across a windy desert no man’s land to a place bordered by abandoned, disassembled VW vans and full of local people piling into small orange busses. We just stood around. The wind and heat were fierce. The barren plain stretched out in every direction and I said to Gene, “So this is Afghanistan”. We found shade in one of the wrecked VW vans and peeled a small apple. Then a bus came and we piled in. Stopping for a quick passport check, I couldn’t believe it was so easy. It wasn’t.

A few minutes later our bus pulled into the search yard and we unloaded to sit and wait for the bank and doctor’s office to open up.

And here I sit. The time is good for nothing but catching up in the journal, which I finally did, and thinking. As I brush big ants off me and shield my eyes from sand and blowing things, I wonder about all the fun things I could be doing. I think of friends back home, of my parents at leisure in their yacht up in cool, green, refreshing British Columbia, and the fun I could be having in Europe. I am glad I’m finally doing this but I’m really looking forward to the end of it all. I’m hoping for health, no hassles, and a good flight back to Europe.

The funny little bank opened up and to change my 100 francs note I had to make three signatures, write down the serial number of the bill and ask several times for the correct change. I came away with 775 afghanis.

The next few hours tried my patience as we bounced from one dusty office to the next getting everything taken care of so we could enter Afghanistan. The luggage “search” was little more than a glance, our shot certificates were checked, the police and the customs officers checked us out, we had Fanta and then finally everyone packed back onto the orange bus and we were on our way — or so we thought.

About 100 yards later there was a police check and most of the Polish travelers on the bus flunked it and had to go through more red tape. Then we headed into the dusty vastness of the Afghanistan wasteland.

The countryside was dry and barren, backed by stark brown mountains and broken every once in a while by a cluster of mud huts, some old ruins or a herd of goats or sheep. It always feels good to enter a new country. So far this summer I’ve only explored two new ones. But everything that lies ahead is as new as can be.

Just when it looked like we were getting somewhere, a dispute broke out in the front of the bus. The Afghanis decided to double the price of the ride from 50 to 100 afghani. Us tourists were stubborn and we refused. One rugged looking Afghan pulled a knife while the driver turned around and headed back for the Iranian border. You could say they had us over a barrel.

There was an uproar, and everyone was trying to solve the problem. One soft-spoken but commanding Pakistani urged us to pay but we all believed if we paid there was nothing stopping them from pulling the same trick again. We compromised — giving them 60 afghanis now and paying the rest upon arrival in Herat. After that episode we were all on edge and I think if they tried to get any more money, they would have had a lot of trouble from their worldly bus load of hardened travelers.

We stopped at a desolate tea shop with a well and a bunch of locals skinning a still warm goat. There was a sign reading “hotel” and I expected the worst. Lots of people are notorious for “highly recommending” certain hotels. This was just an innocent tea stop, however, and it provided Gene and me with our first good look at Afghanistan. The leaky well provided everyone with cold, filthy water. I wallowed in it, really cooling down nicely. We shared a 25-cent melon and my weak, starving body gobbled it down. I felt like I’ve really abused myself by not eating much. For two days I’ve forgone any real meals and just drank pop and sucked on melons. I decided from now on I’d eat well and stay in good hotels for both my mental and physical health and to keep my spirits high.

The tea house was exactly the image I had for an Afghanistan tea house. Old traditionally clad men, who looked like they worked hard but who never seem to do anything but lazily sit around, sitting on rugs on the floor drinking tea and smoking hashish. The room filled with smoke and their glassy dark eyes smiled. A few of us tourists joined them and I just stood over my melon rinds looking in the window like I was watching a documentary on TV. The word spread — our driver was high and the crew would be quite mellowed out. What a bizarre society. I guess when materially you’re so far behind you just give up — sit in the shade eating melons, drinking tea, and smoking hash.

Back in the hot bus we made it to Herat and it dawned on us, “You know, this place looks quite nice.” We were definitely in a new and different culture and both Gene and I perked up. I punched him on the shoulder and said, “Ok, now our trip begins!”

Herat was, like our minimal guidebook info said, “hard not to like.” Very green, as far as towns in this part of the world go, and with lots of parks, I liked Herat right away. Sick of cheap, scuzzy holes, I lobbied for a first-class hotel. We found a dilly.

Hotel Mowafaq, the fanciest hotel in downtown Herat, was just what we needed. Centrally located, showers, swimming pool, clean restaurants, and free of all the con men who plague cheaper hotels, this would make us feel human again. I feel like a bit of a softy, but I love a place that I can leave my stuff in without worrying and walk around in barefoot and get easy peace when I need it. Our double cost only 200 afghanis ($5) and we were prepared to spend more.

We had a Sprite and walked around this central square of Herat stopping in a small clothing shop where Gene and I might get some local clothes so we can go “native” for the rest of the trip. The local baggy clothes make a lot more sense, and they’d be fun souvenirs too. Gene ended up buying a chunk of hashish for about $1 from the guy. We’ll wait and see what we’ll do with it.

Now we were ready to clean up and have a feast. A lovely cold shower and an enjoyable and highly successful stint on the real sit down toilet (you don’t appreciate life’s little things like a toilet to sit on until you don’t have them). Stepping out of the bathroom I thought, “Nice, the diarrhea I had yesterday was just a quick little punishment for bragging how I’d been travelling with solid stools for two months, and now I am a new man.”

Downstairs we ordered the two local specialties that they served on Saturdays and we noticed that the menu had a little note on each page. Since the People’s Revolution, all prices are lowered by 10 afghanis. That made each meal cost only 50 afghanis ($1.25) for soup, bread, rice, meat, and cold water. We were both thirsty and the cold water attacked our self-discipline like the forbidden fruit. We succumbed to it and it was good. I couldn’t help feeling “iffy” about it like I always do when I drink questionable water but that didn’t cut down on its initial goodness. Black and green tea in good sized pots finished the meal nicely and I can’t believe how everything has turned around so wonderfully.

The people here are wonderful, soldiers and police are present on the streets in the wake of the recent revolution. Horse-drawn chariot-like flower-decorated taxis charge down the streets. We stood on the breezy balcony under the stars thinking the only thing not different about this place is the constellations.

My hair is fluffy, there’s air conditioning in the hall, and a bug screen on our open window. The light has a fixture, my teeth are clean, my stomach is full, I feel healthy (and hopefully expect to be tomorrow) and I think I’ll go to bed early tonight. It’s so important to live good and enjoy oneself and, without going through periods of misery and discomfort, you can’t really know what it is to enjoy.

(This is journal entry #1 of a five-part series. Stay tuned for another excerpt later today, as 23-year-old me explores Herat, the leading city in western Afghanistan.)

My 1978 “Hippie Trail” Journal: A Second Dreamy Day in Herat

The quietest Rally in the world is Green – in Croatia