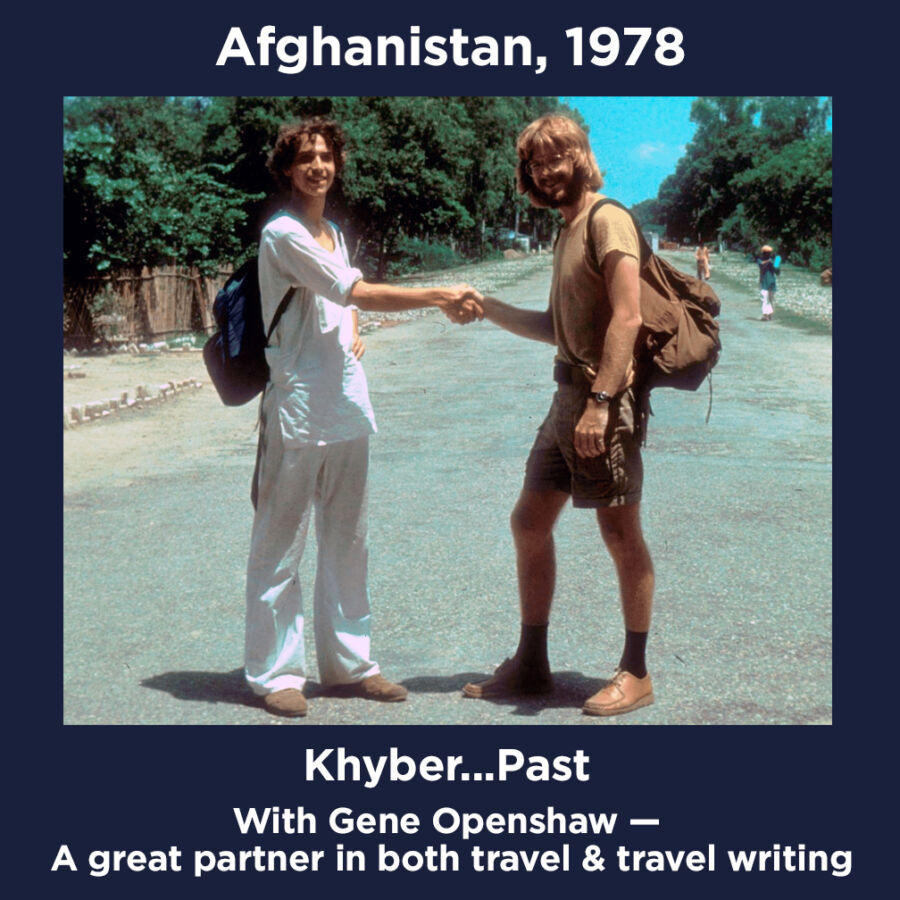 With the fall of Afghanistan, I’ve been reflecting on my travel experiences there as a 23-year-old backpacker on the “Hippie Trail” from Istanbul to Kathmandu. Yesterday and today, it’s a poor yet formidable land that foreign powers misunderstand and insist on underestimating.

In this final journal entry from 1978, stow away with me as I travel from Kabul over the fabled Khyber Pass to Pakistan.

This was the morning I was psyched for. I don’t think I could have woken up feeling bad and I didn’t. Both Gene and I felt good. We had a last big Sina Hotel breakfast and caught our little 8:30 bus to Pakistan.

This bus was the way I wanted to do Khyber Pass. I had dreamed of crossing this romantically wild and historically dangerous pass for years and it was very high on my life’s checklist of things to do — in the top five for sure. Now I was sitting on this kinky old brightly, but badly painted, bus next to a wonderful open window that let me lean half of my body out if I wanted to. Our seats were big and high yet crowded and the bus was full of Pakistanis and “Road to India” travelers.

I was glad to get out of Kabul and almost immediately we were in a scenic mountain pass. From here to the border, while nothing by Pacific Northwest standards, was the closest thing to lush that we’ve seen in Afghanistan. We even passed a lake, but I saw no boats. I wondered how many, or how few, Afghans had ever been in a boat.

Stopping in Jalalabad for a hurried lunch break, we were back on the road in 20 minutes. We were nearing the border and apprehension grew. We hoped it wouldn’t be too much of a hassle but by now nothing surprised us.

The Afghanistan border station, while time consuming, was easy. We just sat around eating a melon and wishing we had money for a Coke. Actually, we had planned our cash reserves very nicely and were leaving with no afghanis. We waited our turn to be searched, filled out the form, got our passports stamped — the usual process, and loaded back on only to stop 100 yards later for our introduction to Pakistan.

This place was pretty unruly. We piled into a room and one by one we were called up to the desk. The customs official “hunt and pecked” our vital statistics into his register and stamped our passports.

Passports in hand, we knew we were just halfway through the process, but we weren’t sure where to go next. We wandered into one ramshackle building, and in a dark room, two men jumped up from two cots and welcomed us to lay down. No thanks! We got out of there and were overrun by dope dealers and black-market money chargers. Everything was so open and blatant that it almost seemed legal. We bought $10 worth or Pakistan rupees and then tried to get our bags searched so we’d be done. Frustrated in the chaos, we just got on the bus and skipped the baggage check. At our window we were entertained by lots of hash sellers and a particularly persistent man with a small bottle of cocaine — 4 grams for $30. I took his picture and told him to get lost.

Finally we were loaded and ready to do it — to cross the Khyber Pass. I was thrilled. Physically, it was just like any other rocky mountain pass, but when you’ve wondered, dreamed, and thought about something for many years, it becomes special. Up and up the bus climbed. Hanging out the window, I tried to take in everything — every wild turn in the road, every fortress-crowned hill, every stray goat, every gaily painted truck that passed us, and every mud hut. I looked at the rugged people who inhabited this treacherous pass and wondered who they were, how they lived, what stories could they tell. Dry, rocky graveyards with wind-tattered flags littered the hillsides. Clouds threatened. We were moving out of the arid Arab side of South Asia and into the wet Indian subcontinent. From now on we would feel muggy — but enjoy the green countryside.

We crossed the Khyber Pass and passed through a tribal village to pay a toll for the privilege. I could see the men around with rifles ignoring the bus and gathered in circles trading both goods and stories.

In a few minutes we were in Peshawar and found that a direct train to Lahore was leaving in an hour. We saw nothing to keep us in Peshawar and the magnetism of India was getting stronger and stronger as we got nearer and nearer. We hassled around trying to decide how, what, and where to buy our tickets. This was a new experience — learning how to handle the Pakistani train system. A little bewildered and not sure what was our best move, we bought $3.50 ticket (first class) for the 12-hour journey, wolfed down a quick 60 cents dinner, and found a spot on the not-so-classy first-class car.

The only difference between first and second class was padded seats and $1.50. We figured for 12 hours it would be nice to have the pads. Our car was very crowded. I was happy to be near a window that blew in hot, muggy air. We pulled out at 5:50, almost on time, and I savored the breeze.

The countryside was flat, lush, and interesting. After a while, I began reading Orwell’s Animal Farm. It was good and the time passed nicely. Then it got dark, and the bugs came. The lights worked like on my old bike — the faster you go, the brighter they shine. This was not a very bright train. The bugs got on me so to speak and I made a bloody declaration “Death by ruthless squashing to any bug that lands on me from now on”. I decided that I would just mash them with my thumb or fingers and roll them through my arm and leg hairs until they disappeared — either rubbing in or falling off.

The ride dragged on. We decided to break up the ride to Lahore at Rawalpindi, the halfway spot, catch an early train in the morning to complete the trip.

It was nearly midnight as we stepped into the muddy puddled streets of Rawalpindi. There was a 5:15 train to Lahore in the morning so we could catch a good four hours of sleep — if we could catch a hotel. It looked very bad — every one was full and other people looking for a place were also frustrated. Luckily, I found a guy with a single open and a shower next door (Gene didn’t tell me about the lizards until later). Otherwise, it was a hole barely worth the10 rupees ($1) we paid. But it did serve its purpose. I took a cooling shower and found a comfortable spot among the bumps and curves of my cot and soon I had worked myself to sleep. Today was a good day — lots of miles covered, a new country and I had crossed the Khyber Pass.

(This is journal entry #5 of a five-part series. If you missed any along the way, scroll back to Tuesday, Aug. 17 on my Facebook page.)

Flabbergasted in a Haarlem B&B