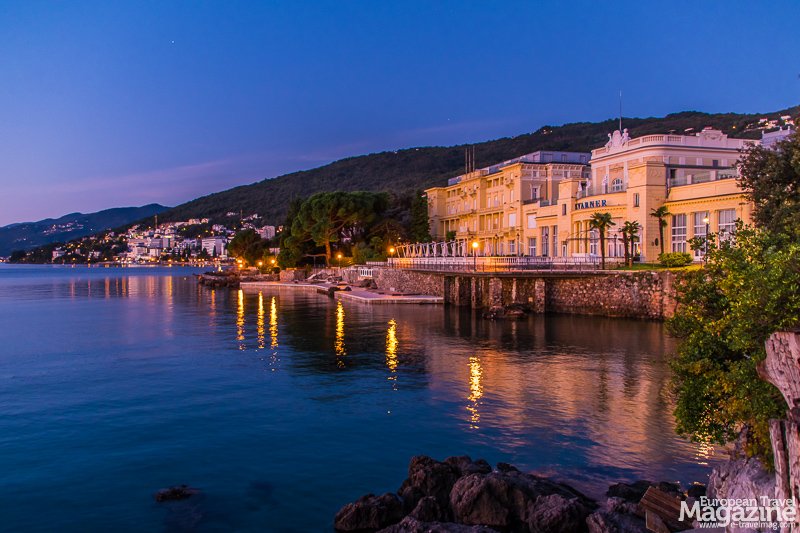 Majestic, Victorian buildings. A luxurious promenade that meanders along the rugged coastline. Parks, that just as well could be found in Vienna. Opatija looks like no other town on the Istria, or even Croatia. Once the preferred summer resort of the aristocrats of Austria, this enchanting seaside city has an elegant air to it, and invites you to stroll along the Lungomare for hours. Discover with us Opatija: Queen of Kvarner Bay.

Birth of a Tourist destination

It was probably under a dinner around 1845 in Villa Angiolina, that Empress Maria Anna, consort to Ferdinand I of Austria, first set eyes on Opatija and got a taste for the mild climate and majestic views of Kvarner Bay. When Emperor Franz Joseph I also became enamoured with the area, Austrian nobility began to build posh villas and majestic hotels in the Victorian style.

Villa Angiolina, built in 1844 by Rijeka patrician Iginio Scarpa and Hotel Kvarner from 1884 are two beautiful examples of Opatijas victorian architecture, but also buildings like nowaday Hotel Imperial from 1885 and Hotel Palace Bellevue from 1889 are luxurious hotels that still today are worth their 4 stars.

Not only hotels were built; also sanatoriums, pavilions, bathing areas, promenades and parks. As early as 1889, Opatija was declared the first seaside climatic health resort on the Adriatic and still today offers luxurious relaxation and vacation to its visitors.

A turbulent and surprising history

The history of Opatija is, of course, much older than its Austrian acme. It’s easy to imagine that Illyrian ships have sailed the shores of Opatija back in the iron age. Like most of the seaside dwellings along the Adriatic coast, Opatija has a long history. When Illyria became a Roman province it’s also easy to picture posh Roman villas on the slopes of Opatija, taking in roughly the same view as we do today. The Romans established their Castrum Laureana in nowaday Lovran, only 6 kilometres south of Opatija and also Tarsatica, nowaday Rijeka, 13 kilometres to the east. Opatija has been right between those two Roman settlements.

The cities and settlements in Kvarner Bay suffered the same fate under different rulers in the following centuries: Ostrogoths, Byzantines, Langobards, Croats and Franks. And as the western part of Istria came under Venetian influence, the eastern part of Istria, from Kvarner Bay and all the way to the southern borders of Dalmatia, became part of Kingdom of Croatia from 925. When the last king died without an heir, the crown passed into the hands of the Árpád dynasty, with the crowning of King Coloman of Hungary as “King of Croatia and Dalmatia” in 1102. Croatia was now, and for more than 400 years, under Hungarian rule.

It was in the Middle Ages that Opatija finally came into mentioning. Its name is a medieval affair, stemming from the Italian Abbazia (abbey), as the small hamlet developed around San Giacomo della Preluca; a Benedictine abbey dedicated to Saint Jacob, first mentioned in 1453.

Following the fall of the medieval Kingdom of Hungary, the Croatian nobility voted to become part of the Habsburg Empire, under the Austrian king Ferdinand I von Habsburg in 1527 and stayed under Austrian rule until the end of WWI.