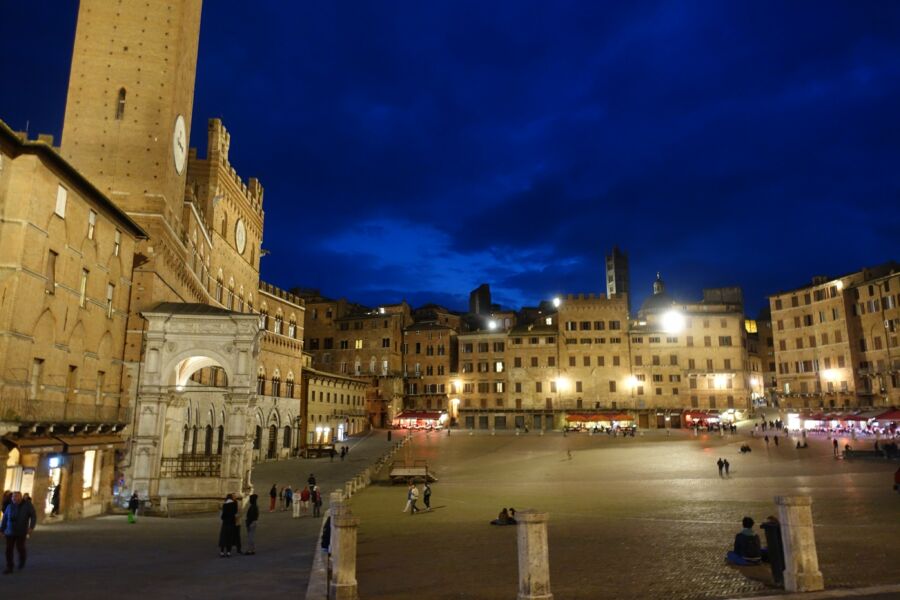 I believe a regular dose of travel dreaming can be good for the soul. Stow away with me to Siena, Italy, in this excerpt from my book For the Love of Europe, a collection of 100 of my favorite places, people, and stories from a lifetime of European travels.

Stretched across a Tuscan hill, Siena offers perhaps Italy’s best medieval experience. Courtyards sport flower-decked wells, churches modestly share their art, and alleys dead-end into red-tiled rooftop panoramas. This is a city made for strolling. With its stony skyline and rustic brick lanes tumbling every which way, the town is an architectural time warp, where pedestrians rule and the present feels like the past.

Today, the self-assured Sienese remember their centuries-old accomplishments with pride. In the 1300s, Siena was one of Europe’s largest cities and a major military force, in a class with Florence, Venice, and Genoa. But weakened by a disastrous plague and conquered by its Florentine rivals, Siena became a backwater — and it’s been one ever since. Siena’s loss became the traveler’s gain as its political and economic irrelevance preserved its Gothic identity.

This is most notable in Il Campo, where I begin my stroll. At the center of town, this great shell-shaped piazza, featuring a sloped red-brick floor fanning out from the City Hall tower, is designed for people, offering the perfect invitation to loiter. Il Campo immerses you in a world where troubadours stroke guitars, lovers stroke one another’s hair, and bellies become pillows. It gets my vote for the finest piazza in all of Europe.

Most Italian cities have a church on their main square, but Il Campo gathers Siena’s citizenry around its City Hall with its skyscraping municipal tower. Catching my breath after climbing to the dizzy top of the 100-yard-tall bell tower, I survey the view and think of the statement this campanile made. In Siena, kings and popes took a back seat to the people, as it was all about secular government, civic society, and humanism.

The public is welcome inside the City Hall where, for seven centuries, instructive frescoes have reminded all of the effects of good and bad government. One fresco shows a utopian republic, blissfully at peace; the other fresco depicts a city in ruins, overrun by greed and tyranny.

But the Church still has its place. If Il Campo is the heart of Siena, the Duomo is its soul — and my next destination. A few blocks off the main square, sitting atop Siena’s highest point and visible for miles around, this white- and dark-green-striped cathedral is as ornate as Gothic gets. Inside and out, it’s lavished with statues and mosaics. The stony heads of nearly 2,000 years of popes — that’s over 170 so far — ring the interior, peering down from high above on all those who enter.

Great art, including statues carved by Michelangelo and Bernini, fills the church interior. Nicola Pisano carved the exquisite marble pulpit in 1268. It’s crowded with delicate Gothic storytelling. I get up close to study the scenes from the life of Christ and the Last Judgment.

Wandering further into the far reaches of the city, I’m tempted by Sienese specialties in the shops along the way: gourmet pasta, vintage Chianti, boar prosciutto, and the city’s favorite treat: panforte.

Panforte is Siena’s claim to caloric fame. This rich, chewy concoction of nuts, honey, and candied fruits impresses even fruitcake haters. Local bakeries claim their recipe dates back to the 13th century. Some even force employees to sign nondisclosure agreements to ensure they won’t reveal the special spice blend that flavors their version of this beloved — and very dense — cake.

A key to enjoying Siena is to imagine it in its 14th-century heyday while taking advantage of today’s modern scene. After chewing on a chunk of that panforte, I decide to linger here into the evening, after the tour groups have boarded their buses and left town. I duck into a bar for aperitivo (happy hour), which includes a free buffet and now I’m primed and ready to join the passeggiata — an evening stroll. I time my arrival back at Il Campo to savor that beautiful twilight moment when the sky is a rich blue dome, no brighter than the proud Siena towers that seem to hold it high.

6 hours in Burano – Colours of the Venetian Lagoon

The Best Hike of my Life: The Tour du Mont Blanc